The pretty marina of Saint-Mandrier-sur-Mer is nestled in the hollow of Saint-Georges, at the southern end of the bay. It offers a panoramic view of the Toulon harbour which faces it. Thanks to its location, it is protected from the wind by two jetties, one facing east and the other west. The village did not really start to take shape until the middle of the 17th century, shortly after La Seyne-sur-Mer became an independent commune. Saint-Mandrier-sur-Mer was then one of these sections. 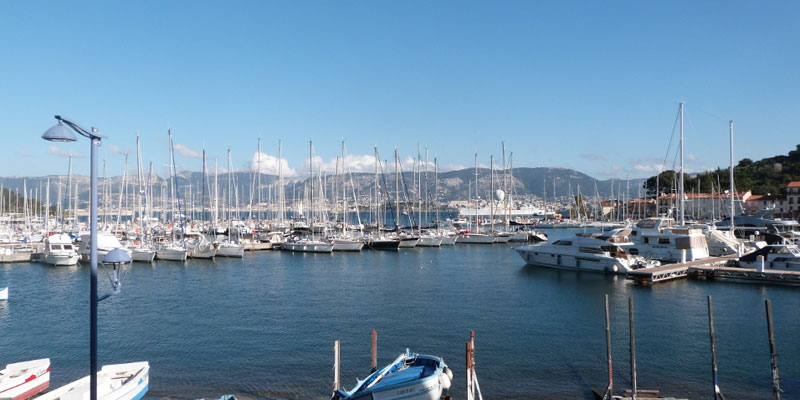 The departure is from the port of Saint Mandrier, on the Jules Guesde quay.

This is the ideal place to start if you are in Saint Mandrier and want to go to Porquerolles.

It takes about 1 hour to get to the port of Porquerolles.

See schedules and rates
See the location on the map

Schedules and prices of our shuttles to Porquerolles from SAINT MANDRIER

The Management reserves the right to modify or cancel all or part of these shuttle schedules without notice in case of bad weather conditions or for technical reasons.
Cheques, vacation vouchers and credit cards accepted.

The history of the harbour will influence the history of the Saint Mandrier peninsula over the centuries. The construction of the Saint-Mandrier Maritime Hospital, initially called the Infirmary of Saint-Louis, and the School for Marine Mechanics contributed to the development of the village. The port played a military role in 1944 until the independence of the commune in 1950.

Today, the port of Saint Mandrier is a place of promenade for the inhabitants of this village, and a mooring port for yachtsmen. Its pontoon can accommodate 800 boats and is mainly used by luxury yachts, pleasure boats and traditional pointus. This harbour is certified as an Active Harbour in Biodiversity. It serves as a landing stage for the Bateliers de la Côte d’Azur and their passengers for crossings to the island of Porquerolles in Hyères. Nearby, there are some quiet and peaceful restaurants.

The boarding for Porquerolles is done on the quay of Jules Guesde on the port of Saint Mandrier. The crossing takes about 1 hour. In high season, there are fixed departure times every day at 9.45am. The return fare is 21 euros for children aged 4 to 10 and 32 euros for adults.

There are many ways to discover Porquerolles Island. The tourist office provides you with all the information you need. For nature lovers, the discovery of the fauna, flora and idyllic landscapes of the archipelago promises beautiful surprises. You can explore the island on foot or by bicycle. Excursions to wine estates and the Conservatoire Botanique National Méditerranéen de Porquerolles are also among the activities on offer.

To take advantage of this dream setting, you can also indulge in idleness, kayaking, paddling and other water activities such as jet-skiing for thrill-seekers. Escape is guaranteed on the island’s superb beaches. Porquerolles even has a diving club, an original way to discover its underwater wealth. This adventure is of course a perfect opportunity to taste the Mediterranean cuisine in one of the restaurants open on site.