The forts around
Toulon harbor

The defense of the harbor of Toulon

Here you will find the main infrastructure that you can enjoy during your tour of the harbor of Toulon. You will then discover the stories, assignments and missions of these buildings over time. 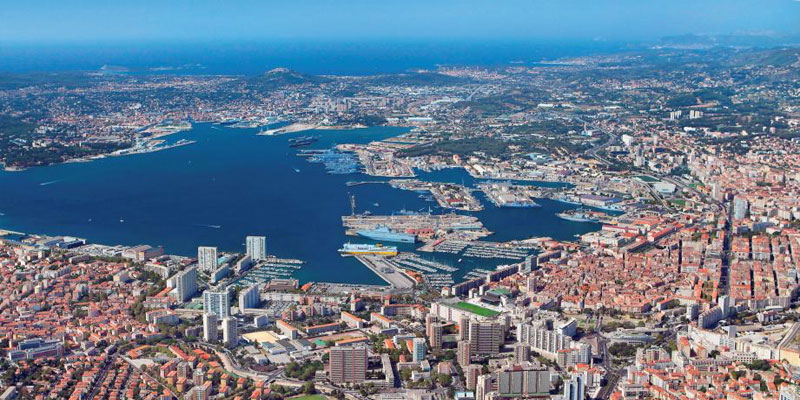 Take part in a 1 hour cruise to visit the most beautiful harbour in Europe: Toulon, discover the military installations of Toulon, the Sablettes bay and the picturesque port of Saint Mandrier, go up the Mourillon dyke and learn about the history of Toulon’s fortifications.
Departure every hour, reservation on the spot or by phone.

Rates and times
See the location on the map

The authorities reserve the right to modify or cancel all or part of the ferries scheduled, without warning, in case of adverse meteorological conditions or for technical reasons.

The fortifications of the harbor of Toulon

These are buildings that protected the harbor of Toulon over the centuries.

The great tower, as it is nicknamed, is the first of a long series of forts in the harbor of Toulon. It was in 1513, under King Louis XII, that ordered the construction of fortifications for the entrance to the Port of Toulon. This name round “Royal” comes from the exorbitant costs incurred by the construction of the tower, and that the king himself has financed the majority. At the end of its construction in 1524, the range of the guns could protect the entire harbor of Toulon, which is why building strong Balaguier and Eguillette have started. The tower has played many roles. Army, she defended the harbor and Toulon territory, it was also used to put weapons in safety during invasions, or house a portion of the population, as in the massacre of St. Bartholomew in 1572.

The fort was built in 1636 in the town of La Seyne-sur-Mer. Its main mission was to complement the action the Royal Tower and thus protect the harbor of Toulon. The main threat was that of the Habsburgs, and it is at this time that was built a long series of forts from Antibes to Embiez Island through the islands of Hyères.

In 1673, the fort defenses will be improved, the eve of the war against Holland. Then, around the 1700s, Vauban came to inspect defense buildings and judged poorly protected if the attack came from the earth. It was then that went up a project to improve the facilities, which will not succeed. After many attacks, the fort is indeed strengthened.

This fort is a military fort built between 1674 and 1685 to La Seyne-sur-Mer, on the corniche Bonaparte. His mission was the protection of the harbor of Toulon, and that of La Seyne shore. Unlike the Royal Tower and Fort Balaguier, Fort Eguillette is not round, but rather square. It has two towers, with two wings.

The fort was transferred to the Navy in 1924 to house the workshops and underwater defense stores.
Then, in 1997, renovations began in the fort. Today it is used for exhibitions and cultural events.

Toulon Arsenal is divided into two parts, one that is at the end of the port, and that of Mourillon. THE construction of the Arsenal Mourillon dates back to the early seventeenth century, it was a great expansion of the arsenal of Toulon. At first used as wood storage space used for building boats, it will be used in the nineteenth for the construction of the first modern submarine. The following century, it will be assigned to the underwater activities as the basis for French submarines.

Today Toulon Arsenal hosts naval vessels, is responsible for the maintenance, repair and export of warships. In addition, Arsenal develops projects in partnership with the European Union to detect and identify any illegal and criminal activity at sea level.